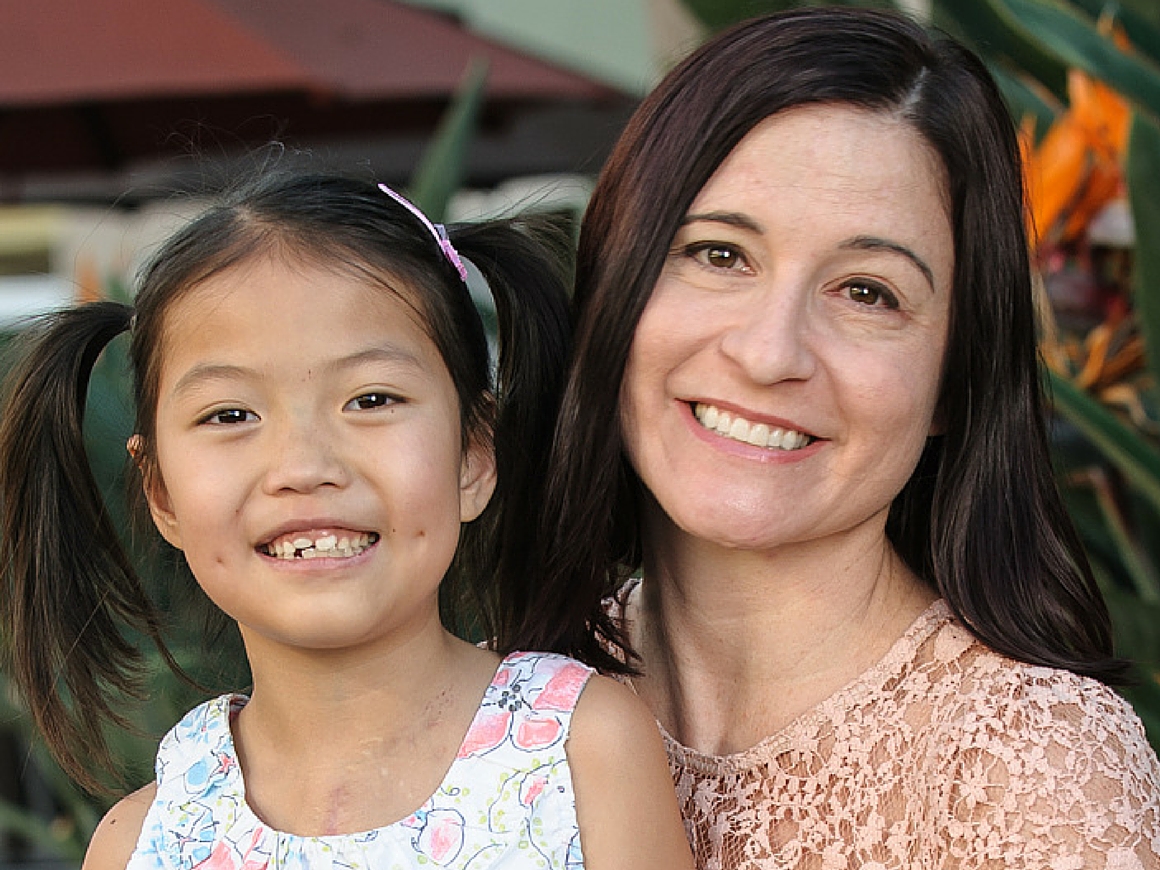 Sarah adopted 4½-year-old Naya after a visit to China. This determined and inquisitive girl had survived many challenging transitions in her young life and was thought to have a minor heart condition. Yet in California, doctors diagnosed the much more serious hypoplastic left heart syndrome. A series of surgeries could keep her heart going for another ten to twenty years. They’d then have to hope for future advances in technology to keep her heart healthy for a lifetime.

Sarah was in shock. She prepared for what she expected to be a day of surgery followed by a three-week recovery. But there were complications, and after several weeks, doctors had to reverse the procedure. Further complications including major blood loss occurred, and her body could no longer function. She was put in an induced coma.

Finding strength in a dark time

In this dark time, Sarah found support with her family at the Ronald McDonald House. Sarah’s sister and her parents were by her side through it all. Together, they had a private place to process their feelings and regain their strength for long hours at Naya’s hospital bedside. Looking back, Sarah says,

The Ronald McDonald House saved me from hospital psychosis. It was so important to take a break.

Here, she could connect with other families in similar situations. And she was amazed at the outpouring of support from volunteers serving meals.

Naya’s body stabilized while in the coma, but a CT scan revealed severe brain damage. It was heartbreaking to see that when Naya finally came out of sedation, she stared ahead with no expression. Sarah worried about her daughter’s future, which seemed so different from the life they’d begun together. Sarah could only sit with her daughter, hope, and pray.

Naya would spend the next three months in the hospital’s rehabilitation unit. In time, Sarah witnessed changes that brought new joy. Naya smiled, understood a joke, and began to move and speak. For Sarah, her daughter’s recovery has been near miraculous. And thanks to the Ronald McDonald House, Naya’s family was at her side to encourage each new development.

Now home in Temecula, Naya’s in a wheelchair and is working to regain her full range of speech and motion. She’s doing well in first grade. Sometimes it’s hard to see classmates do what used to be easy for her, like write sentences or climb the monkey bars. But she’s pushing herself. Naya can write her name again, and she’s close to standing on her own. Sarah’s life has changed, too: while caring for Naya, she’s also training to become a speech therapist.

We wish Naya the best for her continued rehabilitation, and for a heart as strong as the tenacity she’s already shown.